Use Benching Cubicles for Increased Collaboration in Los Angeles

The open office layout came about in part when tech firms had to boot-strap until investors stepped in, concepts were proven and investors funded the operations. In Los Angeles, established corporations along with start-ups and university departments have open office layouts but use systems like benching cubicles to differentiate departments.  Take a closer look at the benefits of the system and what benching cubicles offer to users.

Benching for All Team Players

Benching cubicles work well for managers overseeing a department or cluster of workers and for the team members themselves. Several stations can be configured together to accommodate a couple of people or several can easily be fit and arranged to seat an entire department.  Cubicles originally gave an almost claustrophobic feeling to employees but today’s choices like the Interra Cubicle by Friant allow for a more open, conversing atmosphere.

Benching cubicles have dividers that don’t get in the way like solid walls. Approaching co-workers or managers is easier than in a closed office. Personal interaction becomes organic and for electronic communication, it’s easy to plug in since the cubicles integrate well with technology.  The Accelerate Workstation by Hon is a good example of a system that shows clear boundaries for personal workspace while making the office accessible.

Form and function both come into play when choosing benching cubicles for an office. A finance department can have a completely different set up than a marketing team while a production group may want something even more unique.  The Crossroads Workstation by ODS has one style that can work for more numbers crunching and data entry compared to the Initiate Workstation by Hon that has a more traditional use of personal space.  Planning an office space well requires thinking through work functions and departmental relationships. It can’t be an afterthought. An office that designs work areas that truly support the workers has an easier time of attracting top talent than companies who simply fit desks together.

Whether refreshing an existing office or setting up a new office entirely, consider how benching cubicles, compared to desks and workstations, impact office flow and sharing information. 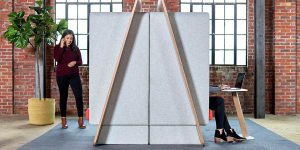 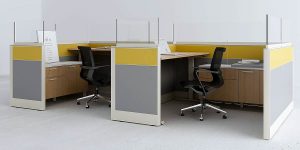 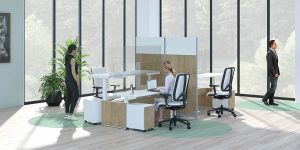 Arranging Workstations for Social Distancing in the Office